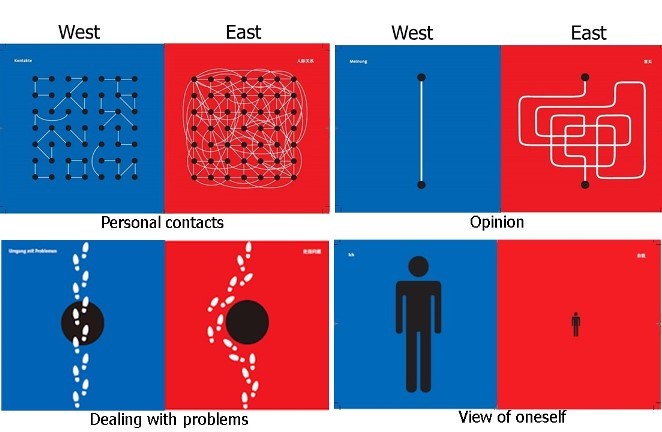 Posted at 09:01h in Latest News by accruadmin

A few years ago, I came across the series of infographics above by a Chinese designer called Yang Liu, where she drew upon her personal bi-cultural experience to illustrate the differences between East and West. A picture tells a thousand words!  The drawings became extremely popular in China as many people related to the differences and, as a Chinese-Australian, they resonate with me too.

As Australian and Chinese business people start working together, it’s important to understand the key differences in business etiquette to build good working relationships and avoid misunderstandings.  My article Understanding Chinese Business culture pointed out some of the differences that Australians need to be aware of when doing business with their Chinese counterparts.

Now let’s have a look at the differences in Australian business etiquette from a Chinese perspective.  Here are six differences about Australian work culture.

1. Australians are open and direct communicators

Australian are laid back, friendly and open. We say what we mean so overselling techniques are not as effective. We are also not afraid of saying no, so you will be sure to know where you stand. We like to get down to business quickly (after just a little social chat) and appreciate straight forward, open and good-humoured discussions. Opinions are respected, and opinionated discussions are entertaining.

2. Relationships are important but gift giving is rare

Personal relationships play a big part in Australia business culture. Connections are valued and an introduction by an established connection is helpful to establish relationships with prospects. However unlike China, gift giving is not a common practice in business and large gifts may be interpreted as bribery. There are some small exceptions however. If you are invited to a colleague’s house for a meal, bringing a small gift such as wine or flowers is typical, and sometimes gifts are given at Christmas to thank clients and associates for their business.

In Australia, we have a flatter management hierarchy. Companies encourage the same level of respect and engagement with all employees, so taking an interest in the people working below you is a sign of an effective manager.  In workplace communication, there is less consideration for seniority and hierarchy. People are encouraged to speak their minds in front of their superiors.

Australians are less formal than other countries and calling a colleague or manager by their first name is typical. When meeting someone for the first time, a handshake is appropriate (as opposed to kisses on the cheek or a bow) and exchanging business cards is common. Be an active listener and ask if you don’t understand something in the conversation. Maintain good eye contact during meetings and conversations to show you are engaged. Sightseeing and sports are good conversational topics. Even though Australians are laid back, we take punctuality seriously. If possible, arrive early for business meetings.

Decision-making can be a slower process than what you are used to as the Australian business culture is collaborative and top management like to consult with their staff prior to making big decisions.  Proposals should be presented with acceptable terms with some allowance for give and take. We often discuss major issues without over-emphasis on details. However, written contracts are generally detailed and firm and it’s expected that contracts are signed by both parties as a show of understanding.

At Accru Felsers in Sydney, we have a multi-cultural team of Australian staff from over twelve different cultural backgrounds, and we work daily with international and multicultural clients.  If you’d like an accountant that ‘speaks your language’, please get in touch!